Bible verse of the day

But I with the voice of thanksgiving will sacrifice to you; what I have vowed I will pay. Salvation belongs to the Lord!
Jonah 2:9

There is no such thing as “churchless Christianity.” 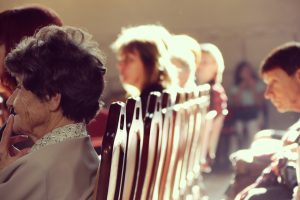 The sun rises in the morning, land wars are brutal in Asia, and Americans pay taxes.

Christians are part of a church. Unless they aren’t.

In the present day, it has become quite fashionable to declare “I am a Christian!” yet live in complete isolation from a church. I never did buy this. But to be sure, I’ve gone to the Scriptures. God has much to say about what genuine Christianity looks like. And it isn’t good for those who name the name of Jesus but spurn His bride, the church.

Below are five reasons the Bible teaches that every genuine Christian is part of a biblical church (part 1 of 2).

1.The basic definition of “church.”

The definition of a church is “an assembly.” The Bible does not refer to “the church” as a building, but rather a people. God speaks of His people as a group of “called out ones.” Anytime He saves someone, they are added to the group. This means that all true Christians are part of an assembly because God redeemed them and added them to His group.

2.The impossibility of spiritual growth in the early church.

There was no internet, podcast, or online church (a misnomer—see God’s definition of a “church” above). Bibles were not available to households; the New Testament was not even written. To learn about the Lord one had to go and participate. He/she had to assemble with others—a group we call “the church.”

This one reason is actually 58 reasons. The two words “one another” is one word in Greek; it is pronounced “ah-LAY-loan” (ἀλλήλων). “One another” introduces NT commands—you’ve heard of some: “love one another” (1 Pet 1:22) and “serve one another” (Gal 5:13). It is impossible to obey these commands if one is severed from a body of believers. A genuine believer obeys Christ’s commands, even these 58 (John 14:15).

This reason alone is why a believer is part of a church. God, in crystal clear language, commands it. To quote the command in full:

“And let us consider how to stimulate one another to love and good deeds, not forsaking our own assembling together, as is the habit of some, but encouraging one another; and all the more as you see the day drawing near. (Hebrews 10:24–25)

The Christian life is hard. God believes that His children need one another. In v.24, He commands them to do two things: 1) “stimulate one another to love and” to promote 2) “good deeds.” Can they motivate one another apart from an assembly? No, the Lord commands them to regularly assemble together. It is there they will receive that Spirit-rich encouragement only possible when gathered together.

5.The biblical teaching on membership.

I think I learned these three “E’s” at my old church (yes, another reason to be part of a church … you will learn some things!). The book of Acts provides examples of the early church. When sinners responded to the gospel, they became part of a group (2:41) and God kept adding (2:47, 5:14, 16:5). Also, church membership was an expectation of the NT. Churches knew who their widows were (1 Tim 5:9) and believers could be identified because they were part of the body (Acts 18:27, Rom 16:1, Col 4:10). Lastly, there is the evidence of leadership. The duties God assigns His elders reveal a clearly designated group of people to care for (1 Pet 5:1-5, Heb 13:17).

These are the first set of reasons true believers are part of a church. (And when I say “part of a church,” I have the NT model in mind—Christians regularly attending, serving, fellowshiping, and worshiping together). Tomorrow, we will examine the second set.